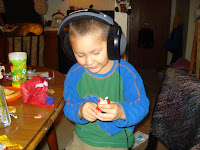 We started a new disc in Kodi's music therapy, and let me say he loves this disc so much more than the last one. This one you hear birds, kids sings, and much better than jazz. I love jazz but Kodi is not a fan. He listens to his music twice a day for 3o minutes. We try and listen in the morning during breakfast and than sometime around dinner time. He has to have it three hours apart, much means I have to keep track of what time he ended so he doesn't listen to the disc so close together. 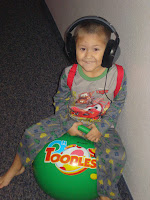 Kingston has been having a battle with ear infections. This is his fifth one since Oct, poor little guy. I noticed that he wasn't feel that well today when all he wanted us to do was hold him. Aaron was up at 5:45 this morning with him and I tried to sleep a little longer, but got up an hour later with the two of them. Kingston just cried and cried, so after we dropped Kodi off at school I called the Dr.office and they got him in.So once more we are on meds which is a battle in it self with Kingston. I have tried putting sugar on the medicine dropper, I have tried putting the meds in a bottle, holding his hands down and forcing the meds down his throat, which I always hate because most of the medicine ends up on me. I finally tried putting the medicine with some rice cereal and he took it. So we will see if we can last the 10 days with the rice cereal 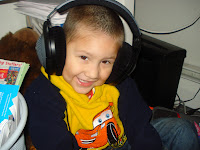 We go in for Kingston 9 month check up on Tuesday, but since we were in the Dr.office today they got his weight and he is 22 lbs and 9.4 oz. What a big boy. He is already walking around holding on to anything he can. He is almost as tall as the table just a couple more inches and he will be. He is already saying Dada, which He said this morning while he was trying to wake up Aaron. I just laughed. I already had been awake with Kingston all night so I didn't mind that he didn't want me. Kingston is kind of a dad's boy. Kodi is starting to be one, he told me the other day 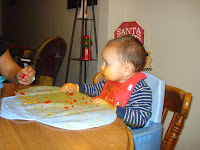 that "MY DADDY is the BEST", I though thanks, I am the one who does most of the things for you and your day is the best," Thanks Kid!
But I still love my Kodi so much. He is starting to put together 3 to 4 word sentences and has been talking a lot more. The music has been a big help. Dakota is still sleeping in his bed, at least he starts off in his bed, but by the time I go to sleep he has come in and misses me. Since Kingston has been cutting teeth and isn't feeling well all he wants to do is be in our bed. The little stinker woke up last night as I was putting him down and saw that he wasn't in our bed and started to scream, I didn't want Kodi to wake up so I picked him back up and held him he went back to sleep, I walked in our room and put him on the bed, KK opened his eyes and saw that he was in our bed and when back to sleep.
My kids I do love them so much! 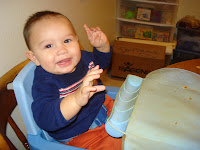 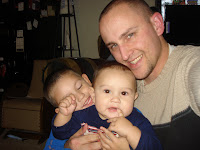 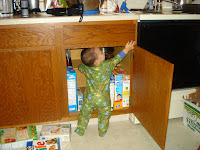 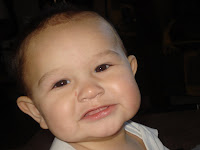 Oh...Ear infections! Yuck. Have you thought about tubes? We skipped the medicine for Emmett's ear infection since it was directly following a cold. My kids take medicine pretty well, but the amoxicillin they WILL NOT take. Yuck.

I'm glad Kodi is enjoying his music! Abby's getting an MP3 player-type thing for Christmas...at least I think she is. And it'll be nice. Unless she's watching TV, the kid never shuts up.

Kingston is TOO cute! I can't wait to meet him!

I can't get over the cheeks on that kid! (Kingston)