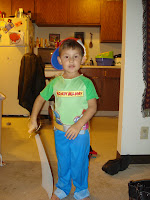 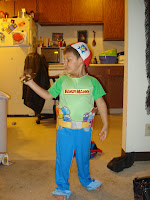 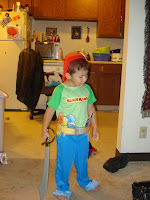 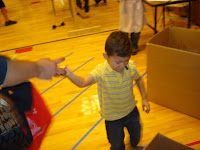 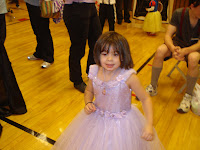 It took a little bit to understand what Halloween was for last year he was sick and didn't want to dress up so this year when I asked him what he wanted to be for Halloween he kept telling me thast he wanted to be Captain Hook so we went to the Disney Store get it. Well of course once we got it he carried it around and showed everyone it, but when it came right down to wearing it he did not want to get in it.


I even took him over to katy's house to see if he would change into it, which we got the pants on and then he started to put the coat on and did not like the way it felt on his skin so off it came and he won't try it again. I guess that is what happens when your son has sensory issues. (which I have to keep in mind when he is being very trying) so he decided that he wanted to Handy Manny which he has two sets of tools we have gotten him. He put on some jeans and a polo shirt along with a hat and was Handy Manny for the ward party.


I than took him over to target that next day and got him a Handy Manny outfit and he loved it. He even wore it to bed. It was nice enough on Halloween that all Kodi had to wear was a "zip" sweatshirt.


I also bough KK a dragon outfit I thought it said 24 months which would have fit him but it was up to 9 months and kingston had passed the weight and length on it. So he wasn't that. Which waes ok since he stayed in with daddy and grandpa to help pass out candy.


By the third house Kodi had figured out what to do. He loved it, it was so much fun to watch him run up to the houses and knock on the door and he was able to say "treat - or - treat". I am so very proud of him and the process that he is making with his speech.