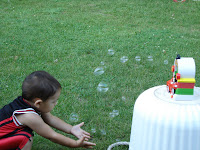 I have not been so very good at posting lately, I am pretty sure it's because I don't have my laptop anymore so at night I do my work and than go to bed. I am so very tried by the end of the day, running after two boys and being pregnant is very hard work.

I hope Aaron likes the pictures of the boys, he usually gets pictures from me on his cell phone when we are out doing things, but I thought I should post some of us playing outside from the other day. 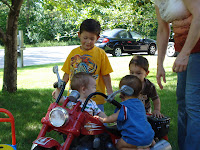 Last year Kingston got a bubble machine and he loves it. Jon Erica's Boyfriend so very nicely came over on Tuesday to Fix my Durango, and while he was doing that the kids played out in the front, I usually don't let Kodi play in the front yard for a number of reason but since Jon was out there and Xander had brought over his Razor we took all the kids out to play. Boy did they love it.
Grandma even brought out the little Harley for the three younger kids to play on. Of course we unplugged the battery. Kingston does know how to push the gas peddle down but doesn't know how to steer the Motorcyle. A very big problem, but he sure does love riding it. He loves going backwords. Silly little boy.
We also found out that Max loves to stand on the Harely. Boys will be boys. 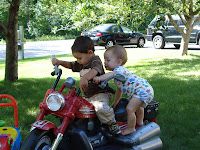 Aaron is doing well, we find out tomorrow where he will be stationed. I can tell you that this week has been a very long week for us, I really hate waiting sometimes. He is doing great on all his tests and I am very proud. He has one tomorrow, he is really enjoying what he is learning. I thought it was funny, I called him the other night because Kingston had fallen off of Kodi's bunk bed stairs, and wanted to talk to Daddy. Of course Aaron was concerned and wanted to make sure KK was ok. He was asking me all kinds of questions. I told him No blood, I dont' see any bumps he is ok. Don't worry about KK he is just fine. "So you think you know all on medical stuff now that you are in that field"? I teased him
"No you probably know more than me right now, but I soon will know more than you." He replyed. I got a good laugh from it.
We can't decide it we should head out tomorrow to see him or not, the boys really miss Aaron and Kodi continues to let me know that he is missing his "daddy"
Kodi tells me that the reason he is acting up is because "I miss my Daddy that is why". I will post where we will be stationed tomorrow! We are living life and loving it at least most of the time!