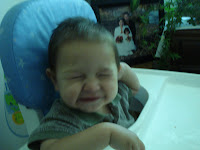 As you can see I found the cord! I am so very happy. We had a great day, I finished cleaning out the playroom and getting our room done. The kids had a sleep over with Grandma tonight, Dakota was very excited about it. We went down to Target with Grandma and she bought a toy for all the kids, for they were having a treasure hunt. Dakota picked out another Transformer. He was so very excited. I told him I was heading out while he played with the other cousins and had some special "Grandma time" he started to cry and didn't want me to go.

Of course once we got home and the rest of the kids came he was more then happy with me leaving. Kingston and I headed over to Tara's house and helped celebrate Sonita's Birthday. We had a great time. Kingston took a very short nap on the way over to Tara's house and than did not go back to school until we were heading home which was at 10. He just loved being able to play with what ever he wanted to. Meela was there as well, but she did not take any of his toys like Dakota and Inara do. Or try and boss him around. I think he thought he was in heaven.

I came home to see all four kids out in the living room sound asleep. Which was great, Dakota is on one of the couches and the other three on the floor sleeping with Grandma. Dakota likes to have his space. Which funny since he had been sleeping in our bed for three years. He now loves his "tunk bed" and his own space.